Darkness falls, a chill fills the air, and here in the beautiful Scottish Highlands, tales of ghouls, ghosts, and all things ghastly are being shared around campfires up and down the land.

Yes, Halloween is once again upon us, and here at the award-winning Dunalastair Hotel Suites, we couldn’t be more excited.

For a while, we certainly promise you a peaceful night’s sleep with not a fright insight when you stay at our luxury Scottish Hotel, and we have to admit that we do love a ghost story.

Thankfully, the Highlands have more than their fair share of spooky stories to be told.

With its rich, often gruesome history, a cast of legendary characters, and miles of dramatic scenery, you never have to go far to hear a terrifying tale of things that go bump in the night.

So, in the spirit of All Hallow’s Eve, the team at our five-star hotel in Perthshire gathered around the fireplace to share with you just a few of our favourite Halloween tales.

From the ghosts of fallen soldiers to the birthplace of famous vampires, Scotland’s rich and often dark history has given us countless spooky stories over the years. Here, the Dunalastair Hotel Suites team share some of our favourites.

The Battle Cries of Culloden

The Battle of Culloden is one of Scotland’s most famous, and most bloody, battles.

In 1746, Bonnie Prince Charlie led the Jacobite rebels into battle against the Duke of Cumberland’s House of Hanover in one last climactic showdown over who should rule Britain.

Charles’ campaign had been waging on for over a year, yet at Culloden, he was swiftly defeated in less than an hour, with around 2,000 of his men meeting their untimely demise.

It was to be the final battle of the Jacobite Uprising, and the last battle ever fought on British soil until this very day.

Not that anybody bothered to tell the soldiers themselves.

Centuries after the famous Battle of Culloden, locals in the area say that the battle wages on, with the ghosts of fallen soldiers emerging from the Scottish mists to fight one another ever April 16th, the anniversary of the battle.

Some claim to hear the clashing of swords echoing across the moors while others claim to have seen the ghosts of the fallen lying wounded on the ground near their gravestones.

As if that wasn’t eerie enough, legend has it that birds refuse to sing around the Culloden battlefield out so as not to raise the ire of the ghosts for whom the war still rages on.

The Battle of Culloden may have lasted an hour barely, but for those who were there, it rages on for an eternity. Local residents claim to hear the clashing of swords in the place where the battle took place, while visitors often report seeing spooky apparitions of injured soldiers.

Did you know that you can visit the very battlefield for yourself and walk among the ghosts of Culloden Moor on your next Scottish getaway free of charge?

Located just a half-hour drive away from our five-star hotel in Perthshire, Castle Menzies in Aberfeldy remains a popular historical attraction for our guests right the year-round.

Yet come late October, it’s not uncommon for would-be ghost hunters to be spotted looking out for the area’s resident spectre.

As the story goes, Sir Alexander Menzies spent many years valiantly trying to defend Castle Menzies and its surrounding land from the wild and unruly Clan MacGregor.

Time after time, Menzies was overpowered by the MacGregors until eventually enlisted an army to help him out.

The army helped him to capture and behead the MacGregor Chief, yet his victory was a hollow one.

Menzies spent the rest of days haunted by the idea that he brought about his own clan’s downfall, and died a man of great sorrow and sadness.

Today, locals debate whether it is his mournful ghost or that of the headless Clan MacGregor chief which roams the open road by the famous Menzies Ghost Stone.

Is it the ghost of Sir Alexander Menzies who roams the area surrounding the Menzies Ghost Stone, or is it that of his arch-rival, the chief of the Clan MacGregor? Either way, we sure wouldn’t like to meet him on a dark Halloween night!

The Ghosts of Drum Castle 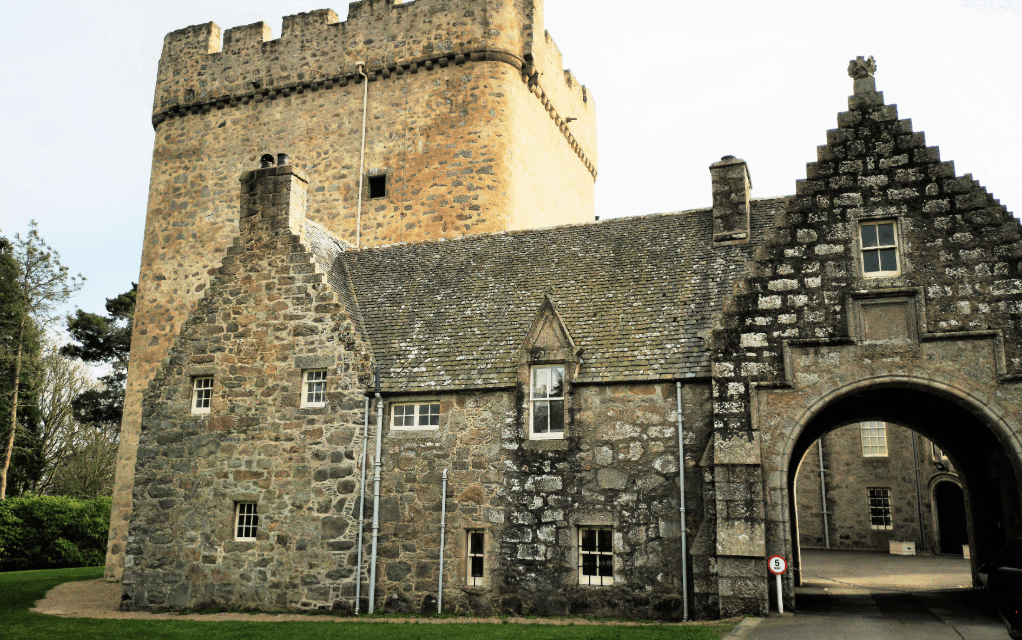 Centuries ago, in 1323, one of Scotland’s most heroic figures, Robert The Bruce, gave Royal Forest of Drum and the Tower of Drum to William de Irwyn as a gift.

Today, that makes Drum one of the oldest tower houses in Scotland. So it perhaps shouldn’t come as too much of a surprise to discover that it’s also one of the most haunted spots in the country.

One of William de Irwyn’s descendants, Anna Forbes has been spotted roaming the hallowed halls on several occasions, possibly searching for her son, Alexander.

Alexander passed on at age six in 1865, though his chilling laughter can still be heard ringing through the corridors.

If that’s not scary enough, one of the Ghosts of Drum Castle was even caught on camera back in 2014.

Castle Drum is one of the oldest -and quite possibly the most haunted- tower houses in Scotland, with ghostly sights and sounds a regular occurrence. 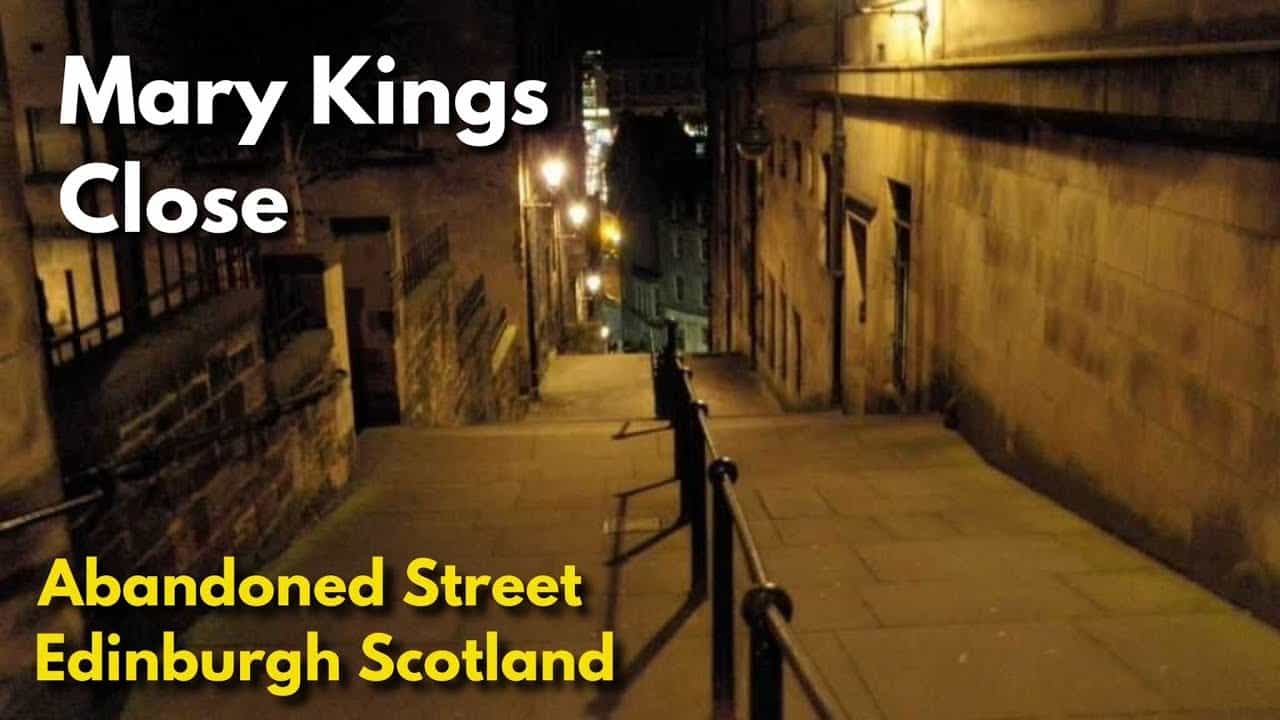 Often known as ‘Scotland’s Spookiest Street,’ this dark, brooding lane just off the Royal Mile is believed to be surrounded by a terrible curse.

The area was completely abandoned and bricked up 1645 following an outbreak of plague, yet those who weren’t fortunate enough to escape on time are said to still linger there in spirit form.

The ghost of a young girl is often seen playing in the area, while other figures roam up and down the lane, which was only recently reopened.

Guided tours will take you directly to Mary King’s Close, but keep your wits about you, some of the resident ghosts have been known to mingle in with visiting tour groups!

Scotland’s Spookiest Street is said to be cursed after it was struck by the plague back in the 1600s. Today, the spirits of those who got left behind when the area was abandoned can still be seen wandering this dark and mysterious alley.

A few hours to the east of the five-star Dunalastair Hotel Suites on the Aberdeenshire Coast since the quiet unassuming fishing village of Cruden Bay.

It’s the sort of remote haven that so perfectly encapsulates the magic of the Scottish Highlands with its bold, dramatic landscapes which belie the air of tranquillity so tangible throughout the village itself.

Yet this picture of peace and beauty hides a much darker past.

The remains of Slains Castle lie nearby. Once a grand home to the influential Earls of Errol, the castle played host to numerous celebrities of the 19th century, including writer Bram Stoker.

It is said that the castle was the inspiration for Count Dracula’s castle in Stoker’s classic vampire story. Meanwhile, The Kilmarnock Arms Inn, where the Irish author took lodgings during his visit to Cruden Bay, remains in existence.

Spookily enough, after Stoker’s visit, the owners of the castle eventually fell on hard times, and the castle ended up being reduced to ruins.

Sure, that might be a coincidence, but we’re not sure we’d be bold enough to visit the birthplace of the most famous vampire who ever lived. 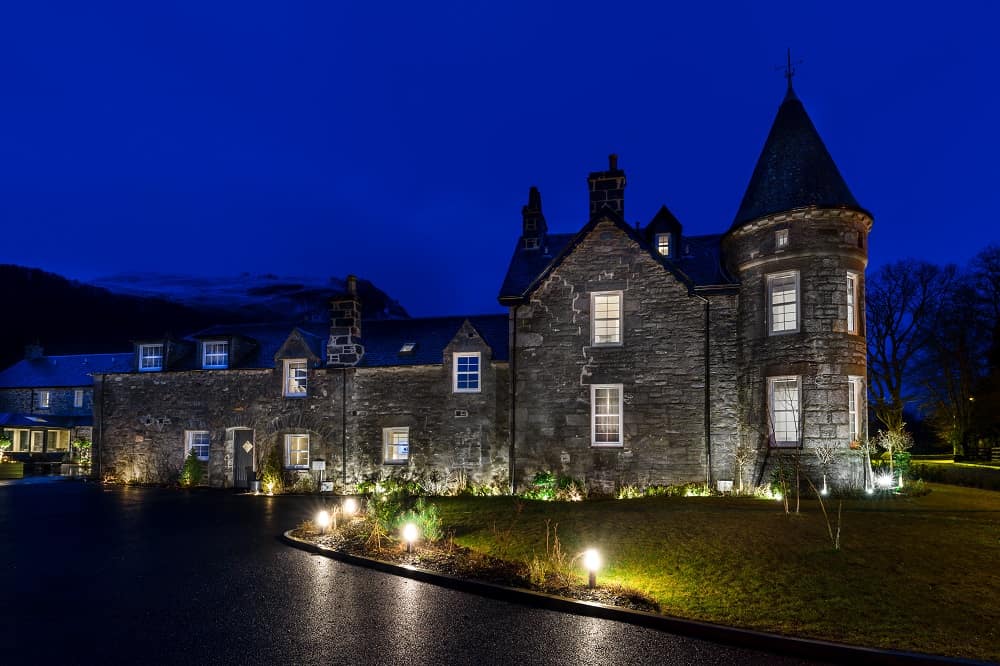 Slip off the walking boots, slip in to your evening clothes and enjoy the finest of gourmet Highland hospitality.

Enjoy your sumptuous suite and a decadent three-course dinner in our fine dining restaurant Edina’s, for two. Following an enchanting evening, wake up to enjoy an à la carte breakfast, surrounded by majestic views of the Scottish Highlands.

Call reservation to make your booking on 01882 580444 or email bookings@dunalastairhotel.com.

After a night of ghost hunting, retire to the peace and tranquillity of the five-star Dunalastair Hotel Suites in beautiful Highland Perthshire – book your stay online today.