Did you know that evidence of people living in Scotland pre-dates Britain’s recorded history by some 8,500 years?

In the thousands of years that followed, this ancient land has seen more than its fair share of epic battles and legendary tales, each one leaving their indelible imprint on the Scottish landscape.

This means that when you visit this beautiful country today, you’re never too far away from a historic castle, iconic landmark or magnificent monument with its own unique story to tell about the heroes and legends who once roamed old Caledonia.

Whether you’re a history buff eager to explore the places made famous by some of Scotland’s most iconic figures or simply curious about the story behind some of the landmarks you’ll see on your next Highland holiday, here’s our guide to five of the heroic figures you’ll meet on your next visit.

The ancient, mystical land of Scotland has been home to more than its fair share of myths, legends and valiant heroes over the centuries. Join us on a journey throughout the Highlands, and beyond as we meet some of the notable characters you’ll encounter on your next Scottish getaway. 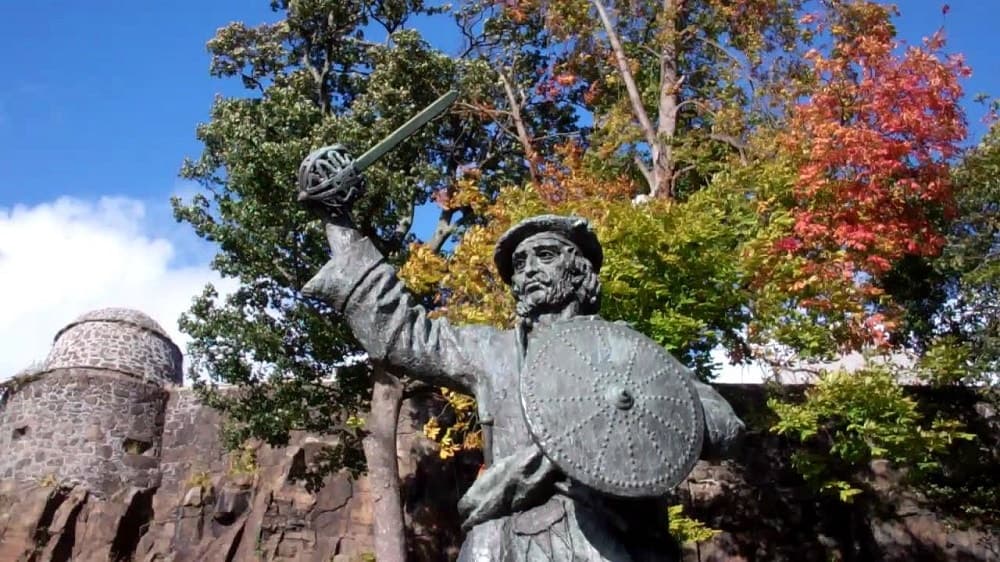 Noted outlaw Rob Roy McGregor left an indelible mark on the Scottish landscape. Whether you’re following in his footsteps on the Rob Roy Way or visiting his final resting place, you’re never too far away from a reminder of the clansman’s legacy.

Often referred to as ‘The Scottish Robin Hood,’ Rob Roy MacGregor was born on the shores of Loch Katrine in the latter part of the 17th century and went on to become a legendary outlaw and folk hero.

MacGregor’s life has been immortalised in numerous works of fiction, including Sir Walter Scott’s 1817 novel, Rob Roy and, of course, the 1995 movie of the same name starring Liam Neeson.

Today, fans of that movie can find the outfit that Neeson wore for his portrayal of the gallant clansman adorning the walls of our own Edina’s restaurant here at the five-star Dunalastair Hotel Suites in Perthshire.

Yet that’s far from the only Rob Roy attraction worth visiting on your next Scottish getaway.

Head to Abbotsford, the home of Sir Walter Scott himself, and you’ll be able to see MacGregor’s gun in the armoury, whilst his gravesite continues to attract many people to Balquhidder, Loch Voil in Central Scotland.

Back in Highland Perthshire, you can follow in the famous outlaw’s footsteps by hiking the Rob Roy Way, a seven-day adventure which starts at Dryden on the West Highland Way and finishes up not far from our hotel in Pitlochry.

William Wallace is more than just a character from that famous Mel Gibson movie. Known as one of the Greatest Scots to Ever Live, the national hero is celebrated with monuments up and down the country.

Today, many know the name of William Wallace from the classic 1995 Mel Gibson film, Braveheart, but the country’s national hero is far from a fictional character.

Widely regarded as one of the greatest Scots to ever live, William Wallace earned his legendary status by leading the Scottish resistance against the English occupation at the beginning of the Scottish Wars of Independence and famously overthrew the opposition at the Battle of Stirling Bridge.

Today, the iconic former Guardian of Scotland is widely revered with statues and monuments throughout the country.

A ninety-minute drive from our hotel in Perthshire you’ll find the National Wallace Monument which overlooks the very site where Wallace and his men defeated the English at Stirling Bridge.

Climb to the top of the monument’s 246 steps to enjoy truly spectacular views, or stay closer to the ground and explore the hallowed Hall of Heroes where you’ll find The Wallace Sword.

Elsewhere, you’ll find monuments and landmarks associated with Wallace in Aberdeen, Glasgow and Roslin Glen Country Park. You can find out more about all of these thanks to Visit Scotland.

After Wallace was captured by the English and passed away, he was succeeded in his role as Guardian of Scotland by Robert the Bruce.

The valiant warrior continued to lead the charge against England in the First War of Scottish Independence and became King of Scots from 1306 until his death at the age of 54 in 1329.

Known today as the most successful monarch to have ever ruled in Scotland, Robert the Bruce was memorably portrayed by Chris Pine in the acclaimed 2018 Netflix movie, Outlaw King. The movie featured scenes filmed just an hour away from our Perthshire hotel at Scone Palace, with other filming locations including Stirling, St Andrews and Arbroath.

Scone palace itself is also well worth a visit as the place where the king was crowned.

Meanwhile, visitors to the Robert the Bruce Heritage Centre in Renton, West Dunbartonshire can sit upon a Royal Throne that features a replica wooden carving of the Bruce’s Great Seal of Scotland.

Visitors to the National Museum of Scotland in Edinburgh can also cast their eyes upon the feasting cup that the great king is said to have drank from.

Always thought Macbeth was a character made up by Shakespeare? Discover the legacy of the real man behind one of The Bard’s most famous plays, and the myths and rumours surrounding his reign as king.

In one of his most well-loved plays, William Shakespeare positions Macbeth as a valiant warrior who is felled by his deceitful wife, causing the pair to eventually fall victim to gruesome circumstances.

Though many know his name as one of The Bard’s most memorable characters, few realise that he was, in fact, a genuine 11th-century king whose rain lasted an entire 17 years, a far cry from the two months depicted in The Scottish Play.

In the Northern part of the Highlands, a two-hour drive from the five-star Dunalastair Hotel Suites, you’ll find the area of Moray, where the real Macbeth is said to have ruled.

Meanwhile, in Forres, you’ll find the 6.5-metre Sueno’s Stone which rumour has it is the place where the king originally met the three witches recounted in Shakespeare’s play.

If you’re over at Scone Palace exploring the place where Robert the Bruce was crowned, be sure to visit Moot Hill where it is believed that Macbeth’s coronation took place. 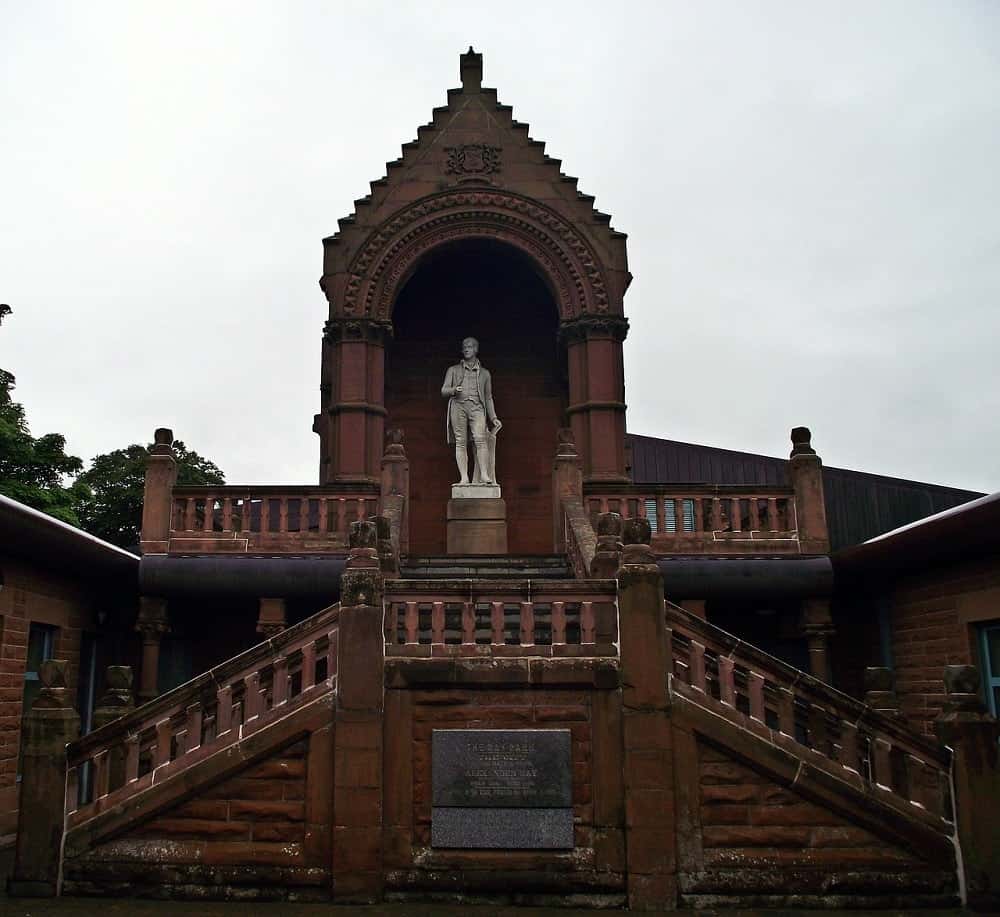 From one Bard to another next, as we wrap up this list with Scotland’s own Bard of Ayrshire.

They say that the pen is mightier than the sword, so while Robert Burns may not have fought battles, he more than deserves his place among any list of Scotland’s most heroic figures.

Burns tragically only lived to the young age of 37, but in his short life, he created an enormous catalogue of poetry and lyrics which beautifully encapsulated the idyllic scenery, the noble spirit and the fascinating people, places and creatures that make Scotland the wonderfully unique country that it is.

In his memory, we celebrate Burns Night up and down the land every January, though if you can’t wait till then, you’ll find a wealth of national attractions paying tribute to Scotland’s favourite son.

Ayrshire itself is several hours drive from our luxury hotel in Perthshire, but it’s here where you’ll find both Burns’ birthplace and a museum set up in his honour.

In Dumfries, you’ll find the famous Globe Inn where Burns is said to have frequented, while The Writer’s Museum in Edinburgh pays tribute to Burns, as well as Sir Walter Scott and Robert Louis Stevenson.

A little closer to home, be sure to visit the magnificent Falls of Bruar in Blair Atholl, an area of outstanding natural beauty that so stole Burns’ heart that he immortalised it in verse.

Article Name
The Stuff of Legend: Five Heroic Figures You'll Encounter on Your Journey Through Scotland
Description
The ancient, mystical land of Scotland has been home to more than its fair share of myths, legends and valiant heroes over the centuries. Join us on a journey throughout the Highlands, and beyond as we meet some of the notable characters you’ll encounter on your next Scottish getaway.
Author
Richard Deak
Publisher Name
Dunalastair Hotel Suites
Publisher Logo